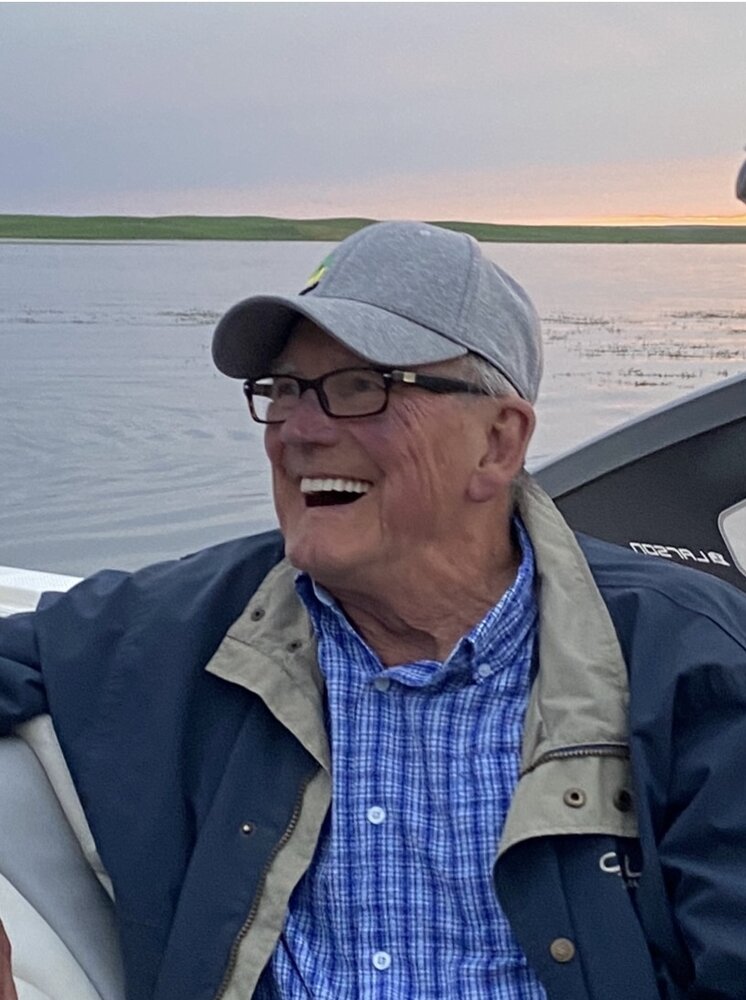 Allan Stuart Hoag of Bengough, SK passed away on Tuesday, December 27, 2022 at Thomson Lake, SK with family at his side, at the age of 77 years. Allan was born on April 14, 1945, in Ceylon, SK. He was the second of four children born to Stuart and Anna (Haugen) Hoag. He grew up on the family farm near Hardy, SK, and in the winter months, the family lived in Bengough where Allan’s dad worked as the caretaker for the curling rink. After leaving school, Allan worked on road construction, oil rigs and in 1968 began driving bus for Moose Mountain Bus Lines. In July 1970, Allan married Joanne Schoenfeld. They were blessed with three children: son Derek 1971, Cori 1974 and Michelle 1976. In the spring of 1974, Allan took over the family farm, which they continued to farm until 2012.  In the fall of 1975, following in his dad’s footsteps Allan became the icemaker and caretaker of the Bengough Curling Rink, which he continued to do for the next 42 winters. Allan was very active in the community serving on various volunteer boards: skating rink, curling rink, schoolboard, Co-op Board and spent countless hours volunteering his time coaching ball, curling and instructing curling clinics, Allan was the recipient of two Sports Volunteer awards and in 2017 received the Scotty Richardson Memorial Award.  He and Joanne enjoyed golfing, camping, curling recreationally and competitively. In 1995, they represented Saskatchewan at the Elks Mixed Nationals in Yellowknife, NWT and in 2004, Allan represented Saskatchewan at the Elks Senior Nationals in Kamloops, BC. Family was very important to Allan. He was very proud of his children and grandchildren as they excelled in all the sports they played and was their number one coach and fan. He will be dearly missed by his family, friends and community. Allan leaves to cherish his memory, wife Joanne Hoag; son Derek (Genelle) Hoag, granddaughters Sarah and Chantel; daughter Cori (Gilles) Dauphinais, granddaughters Josée and Renée; daughter Michelle (André) Pinsonneault,  grandchildren Vincent and Simone; sister Ilene Harlos; brother Dale (Jeanne) Hoag; brothers-in-law Jim (Beverly) Schoenfeld and Blair Schoenfeld; numerous nieces, nephews and cousins. Predeceased by his parents Stuart and Anna Hoag; sister Carol (Andy) Everton; brother-in-law Peter Harlos; father-in-law and mother-in-law Art and Helen Schoenfeld. A Celebration of Allan’s Life will be held on Friday, December 30, 2022, at 2:00 p.m., at the Bengough Community Centre, Bengough, SK. Memorial donations in Allan’s memory can be given to the Bengough Curling Rink, Box 17 Bengough, SK  S0C 0K0.

Share Your Memory of
Allan
Upload Your Memory View All Memories
Be the first to upload a memory!
Share A Memory