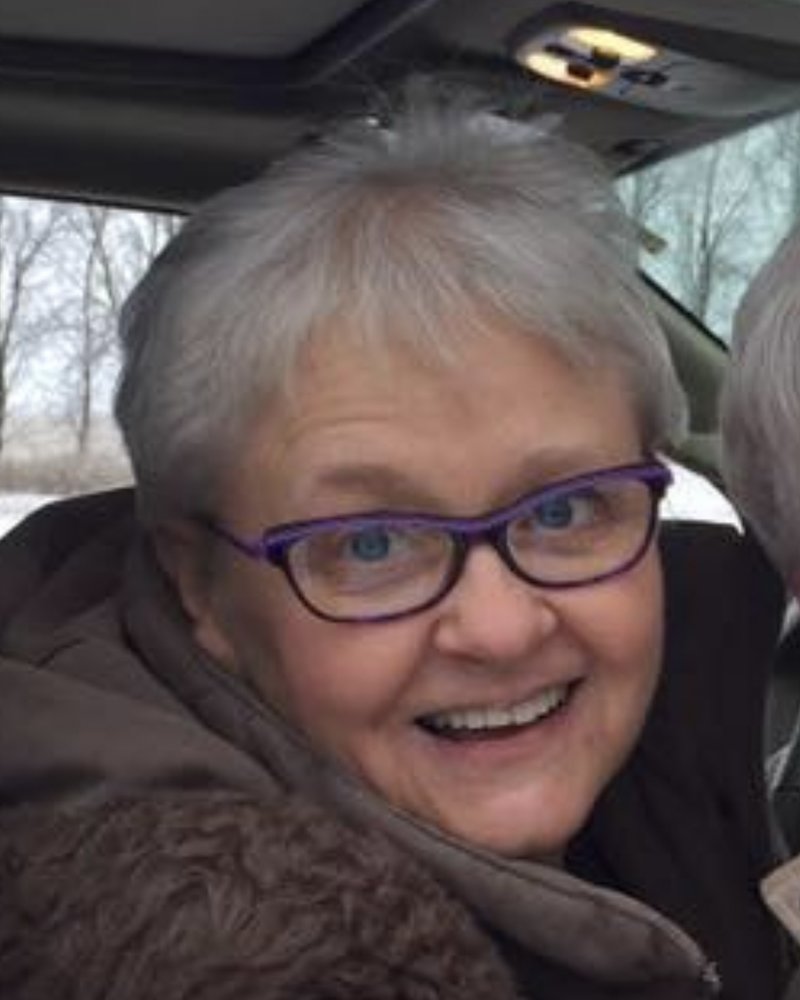 Jean Margaret Cayer of Assiniboia, SK passed away on Wednesday, December 18, 2019, at the age of 64 years. Jean was born on December 18, 1955, in Assiniboia. She was the third daughter and youngest child of James and Joyce (nee Carter) Mitchell. Jean was raised in the Stonehenge district and attended a one room schoolhouse. By the time she reached grade 7, students were being bussed to Assiniboia. Jean graduated from the Assiniboia Composite High School 1973 and attended Reliance College of Business in Regina. After graduation from college, she took a job with the Pioneer Trust Co. in Regina. On one of her weekend trips home to Assiniboia, Jean happened to meet Guy Cayer, who was also working in Regina and home for the weekend. They were married on August 30, 1975, at St. George Roman Catholic Church in Assiniboia. They made their home in Regina, where Jean worked in the financial industry and Guy trucked for the Federated Co-op throughout Canada and the USA. Through Pioneer Life, Jean and Guy traveled to Spain and Morocco as Jean’s reward for being employee of the year. They moved to Saskatoon for a year and in 1980 to the homestead farm of Jean’s paternal grandparents, located west of Assiniboia at NE 25-7-2-W3, in the Bruce School District. Jean worked for Bill Goulden’s Insurance Agency for a year and in 1981 began her career at the Assiniboia Credit Union. She was a loan officer, accounting supervisor, and then moved into the HR field, eventually becoming a member of the executive management as manager of human resources. When the Assiniboia Credit Union merged with Conexus, Jean became a supervisor for the lending support area of Conexus Credit Union. Jean put her entire heart and mind into her work and went above and beyond when it came to her job. She would spend countless hours completing her work, planning parties for the kids of her coworkers at Christmas, and put out decorations for different events happening in town. She was dedicated to her job and always ready to help anyone who needed it. Jean and Guy were blessed with two children, Chad in 1990 and Kendra in 1995. Jean was overjoyed to become a mom. She was active in her children’s lives and loved spending time with them. Family life was busy, with hockey, figure skating, baseball, and dance. In 2003, Jean left the Credit Union and began doing odd jobs around town. She especially loved working at the scrapbook store. Jean was always into crafts and painting, and when she found scrapbooking she was hooked. Jean went on many retreats and was always collecting paper and stickers. She often said that she wanted to scrapbook so she could remember all the good times in her life. Jean enjoyed spending time with her splurge group, was a member of St. George’s Parish Council, and a long-time member of the Assiniboia Community Choir.  Jean had a beautiful singing voice and was requested to sing at many weddings. Jean was diagnosed with MS in 2012. She kept a positive outlook on life and continued to put others before herself. Jean was a kind, welcoming, and caring person, and amazing friend. She will be remembered for her amazing smile, the sparkle in her eye, and as the loving, compassionate, and kind person she was. She will be forever in the hearts of her family and friends. Jean is survived by her husband Guy Cayer; son Chad Cayer (Amber Gallamore), grandchildren Deighton, Ryder, Levi, Destiny; daughter Kendra Cayer; sister Beth (Bob) Jessop, nephew Rob Jessop, niece Jaimie Jessop; sister Marion (Ed) Sadlemyer, nephew Trevor (Sasha) Sadlemyer, great nephews Zac and Zayden; niece Kelsey (Kelly) Petryna, great niece Casey, great nephews Frank and Jesse; father and mother-in-law Denis and Rita Cayer; sister-in-law Nichole (Gregory) Neff; brothers-in-law Michel (Lee) Cayer, Daniel (Janice) Cayer André Cayer, Marc (Corina) Cayer, Bill Middleton; numerous nieces, nephews, great nieces, great nephews, great great nieces and great great nephews. Predeceased by her parents James and Joyce (nee Carter) Mitchell; sisters-in-law Carmelle Lemieux, Valerie Cayer; brother-in-law Gabriel “Butch” Lemieux; nephew Colin Cayer. Prayers were held on Sunday, December 22, 2019, 7:30 p.m., and Funeral Mass on Monday, December 23, 2019, 11:00 a.m., both at St. George Roman Catholic Church, Assiniboia, SK. Presider for prayers was Gail Delorme. Celebrant was Father Joseph Strohhofer. Honour Guard was formed by Jean’s Splurge Group, Bonnie Batty, Kathy Batty, Leanna Batty, Judy Chubb, Janet Cristo, Clara Ellert Wanda Ogle, Sandra Peutert, Sherry Richards, Tracy Richards, and Claire Seal. Pallbearers were Trevor Sadlemyer, Rob Jessop, Jason Lemieux Craig Cayer, Tyrell Cayer, and Jerrod Cayer. Interment took place at Mount Hope Cemetery. Memorial donations in memory of Jean to the MS Society of Canada, 150 Albert St., Regina, SK  S4R 2N2 were greatly appreciated.

will take place at the Parish Hall following the interment
Share Your Memory of
Jean
Upload Your Memory View All Memories
Be the first to upload a memory!
Share A Memory
Send Flowers