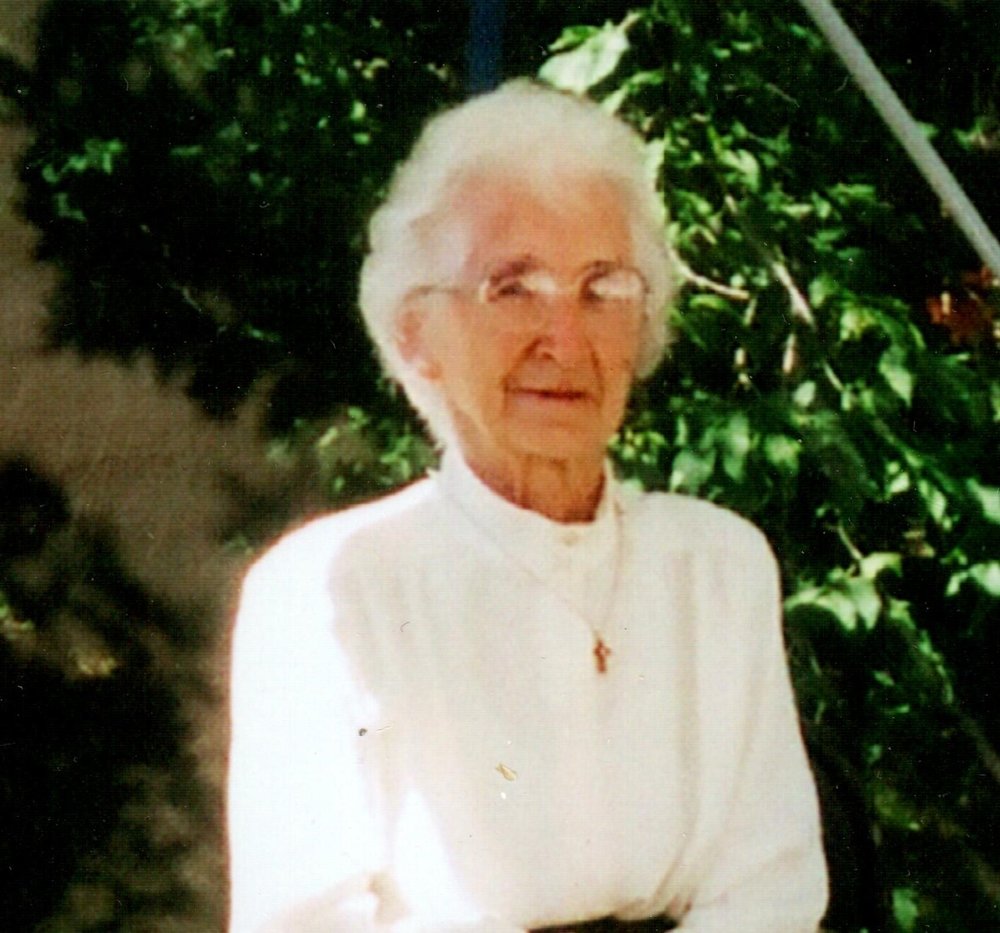 With heavy hearts, the family of Adaline Thomas announce her passing on January 10, 2020.

Adaline Eleanor Thomas (nee Rumpel) was born in Vanguard, on July 30, 1926; which means she was 93 at the time of her passing. She passed peacefully at the Foyer D’Youville in Gravelbourg, having never experienced any serious illness or life-threatening disease. Right until the very end, she never regularly took any medications of any kind.

She was the eldest of 10 children born to John and Martha Rumpel. She lived for a while in Vanguard, then was raised on the family farms in Billiman in the Mankota area, then to Ferland and finally settling near Arbuthnot.

She attended school at Ferland for 2 years, then to Kramer School and finished formal schooling at Meyronne; After school she went to Regina to work at Simpsons where she spent 5 years, she returned home in 1950. She didn’t have to travel very far after that as she married Conrad Thomas (whose family farm was 3 miles north of her own family farm) at St. Elizabeth’s Parish on April 10, 1951. Then she and Conrad lived together on the Thomas homestead until 1982, when they moved to Gravelbourg, where they entered retirement shortly thereafter. They lived on 2nd Ave until she moved into the Pioneer Villa apartments in 2014 and from there, she moved into the Foyer in 2017 where she lived until her passing.

Adaline was very involved with the Roman Catholic Church and was a founding member of the St. Elizabeth’s Catholic Women’s League (CWL). Her faith has always been an important part of her life, which extended to her volunteer work with Sarcan/IPI and the School.

She enjoyed music and (later in life) puzzles and was an avid reader. She was meticulous in her record keeping, we noticed records of every telephone and power bill she ever paid! She also kept personal notes and memorabilia, as we went through her personal effects, we found letters and news articles, etc. that she gathered and kept for her entire life.

She walked vigorously, we would challenge anyone to keep up with mom while walking, even when she was well into her 80’s. Amongst her family she was renowned for her fried chicken (we understand the recipe is a well guarded secret that very few have access to) and her freshly baked buns.

She was predeceased by her parents, her 9 siblings, her husband Conrad in 1999; her Daughter Constance (Koni) in 2009, And her great-grandson Evan in 2018. She leaves to mourn her passing:

Frank (Betty) Thomas and their 4 sons Scott (Laurie) and their daughter Jordyn, Michael (Rina), Chris (Sherry) and their 3 sons Rylan, Cohen and Kam, and Curtis (Deb);

Mary (Bob) Corcoran and their 4 sons Buckley (Carmen) and her family; Jesse (Mandi), Cody (Sara) and their 3 children Everett, Emilia, and Adelaide; Clint (Judy) and their 2 children Weston and Guin

Lenard (Monique) Thomas and their son, Trint and daughter, Jasmin

Plus many nieces, nephews and true friends.

In lieu of flowers donations are encouraged in Adaline’s memory to either: The Lady of Assumption Co-Cathedral Restoration fund or the Evan Thomas Memorial Trust.