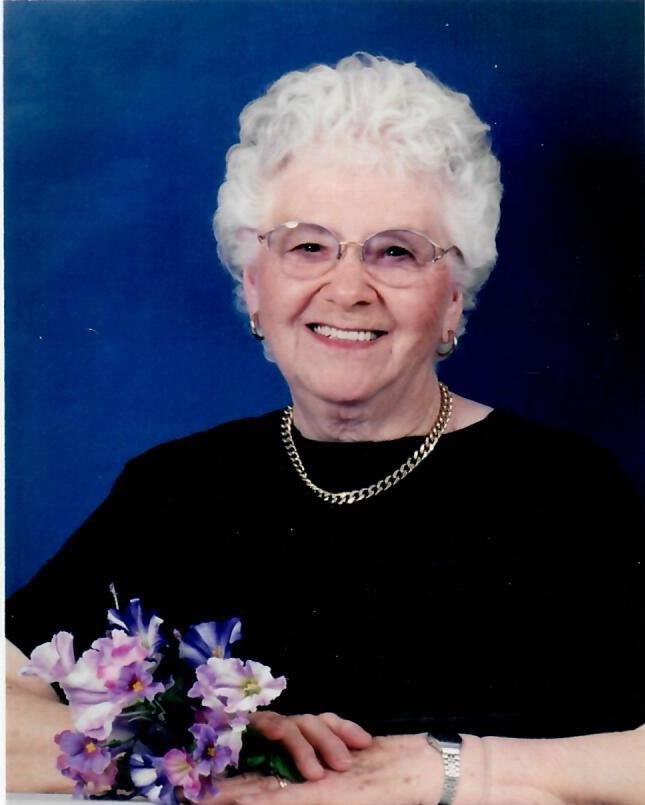 Florence Magdalene Panko (Schnell) passed away January 16, 2020 at Grasslands Health Care Centre in Rockglen at age 97. Florence was born on April 29, 1922 to Ludwig and Florence Schnell on her parents farm in Goose Creek district. She grew up there with 2 brothers and 4 sisters. She attended Goose Creek School, which was 2 miles from home, walking a good deal of the time. She worked as a hired girl at different homes and while working in the Killdeer area met Nick Panko. Two years later they were married on Nov. 1, 1945. They started a small ranching and farming operation. Nick worked for Dept. of Highways to subsidize their income and later drove school bus. Their oldest daughter, Deanna, was born in Jan. 1947 during a severe winter. Holly, their second daughter, was born in June 1954. On the farm, she helped raise cattle and chickens. Baking, cooking and cleaning were priorities. She grew a large garden and canned everything. She could embroidery, knit, crochet and sew not only beautiful outfits, but stuffed animals for her grandchildren (all without a pattern). She herself was always fashionably dressed. She reupholstered furniture and turned old TV cabinets into china and storage cabinets with shelves and sliding doors. She was employed at the Killdeer Co-op store for a few years, which she enjoyed immensely. She loved crossword puzzles and her and Nick’s trips to Saco Hot Springs in Montana. She adored her grandchildren and spent endless hours participating with them in games and listening to their stories. Her and Nick retired to Assiniboia in 1986. They were active in the Alliance Church and spent many hours visiting with friends and neighbours. Florence is predeceased by her loving husband Nick (Aug. 2000), her parents, brothers Roy and Clifford and sisters Elsie, Waneeta and Vera, and son-in-law Garry Jepson. She is survived by her sister Myrtle, daughter Deanna (Ken Fettes) and Holly (RJ) Harkness. Grandchildren Kim (Sarah) Jepson, Derek Jepson, Andrea (Neal) Duford, Daila (Sean) Duford and Shelby (Haley) Harkness, and 14 great grandchildren and 5 great great grandchildren. There will be a celebration of her life at a later date. Interment will be in Mount Hope at that time.