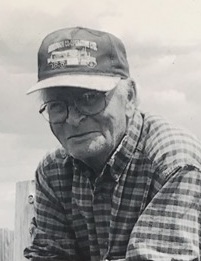 Theoroy was a humble, selfless, kind man. A devoted family man, deeply loved and respected father and absolutely adored grandfather. He was born to Amanda (nee Youngberg) and John Thuen in Bengough, SK on May 18, 1919. He grew up on the family farm at Harptree, SK and attended Muddy View School. He was an avid reader and enjoyed learning, especially history. Theoroy went on to complete Grades ten and eleven by correspondence. He was always eager to learn new things even in his elderly years. He started farming with his father and brother Leslie while still attending school. He enjoyed ranching, working the land, and riding horses, and inhis later years, he used his “Red Quad” in the pastures. On March 4, 1953, he married Shirley Schwindt, they later separated. They had five children. He built a new house, barns, and established a farm on SE 28-04-26 W2nd in the mid 1950s. When Theoroy’s sons were old enough, they joined him and uncle Les. He was the first OCIA certified organic farmer in the district, farming organically for over thirty years. He was the first and longest grower of Kamut in the area. One year he was awarded, by the Certification Inspector, “The Fastest Driver on Crop Inspection”. Theoroy said his “crops looked better that way”. Theoroy had adventures and misadventures, but through it all, he kept his wit and enjoyed life. He had a strong love for his Creator, Jehovah. Some of his greatest enjoyments were attending all the grandchildren's functions, checking cattle in the pastures, the smell of the fresh earth in the springtime, ripened grain at harvest, a warm beer, whiskey with a little water, peppermints, and lots of chocolate.  But most of all, he loved his time with his family. Theoroy’s eyeswould get an extra twinkle when they walked in the room. He died as he lived, with incredible dignity and grace surrounded by love.

Share Your Memory of
Theoroy
Upload Your Memory View All Memories
Be the first to upload a memory!
Share A Memory