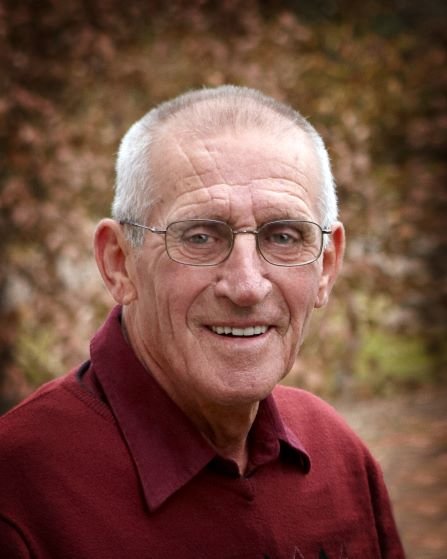 It is with deep sadness that we announce the sudden passing of Emile Charles Martineau with his family gathered around him on February 29, 2020. Emile was the son of Joseph and Marie Anne (nee Fournier) Martineau and was welcomed to the world on January 4, 1933, by his three older sisters Laurette, Rita (Larry) and Beatrice (Bernard) at E20-7-5 ten miles south and two miles west of Lafleche, SK. Raised on the farm, speaking only french, he was comfortable with hard work and mischief. Dad attended Winnifred Country School until grade 8, travelling by horse, buggy and sleigh. He obtained his Gr. 10 at Harwood School. After farming for a while and seeking a secure job and home in a few other towns, he apprenticed to be a plumber and gas fitter, later having his own business with his son Joe in Lafleche. Dad was well known throughout the south country as he thawed watering holes for ranchers and made sure furnaces were running even if that meant middle of the night repairs. He courted and married Jeannine Clermont on November 18, 1953, spending almost 65 years together until Mom passed in April of 2018.

Dad was fun – he loved to tell stories and jokes and laugh. Coffee breaks at the café, meals around farmers’ tables, and socializing at the bar along with cheering on hockey and baseball were regular parts of his small-town life. He looked forward to visits from his children, grandchildren, and friends. Building a new house with a large yard helped him return to his farming roots and he worked as hard in the yard as he did at his plumbing business with pride and satisfaction. Dad was a person of faith – he believed in Catholic schools and served as a trustee for several years and was a faithful member of Ste Radegonde Parish. Mom and Dad moved from Lafleche to Moose Jaw while they were still in good health as they wanted the energy for a new start living with their daughter Louise until Mom’s passing. There they had support, dogs and grandchildren to hang out with, and a large yard to help tend. Dad also had time for woodworking in a shed converted to a shop and blessed many with his benches, cardholders, Pepere Martineau style stools, and small parts boxes.

Dad’s children are his millions…millions of moments... of card games, shuffleboard and horseshoes.. of dancing at weddings…of jokes and sometimes hard moments...of touring the south country and re-visiting the homestead…of harvesting potatoes or trimming trees...of moving kids and fixing their houses…of watching all of his kids and grandkids dance, play sports, receive the sacraments, and graduate from high school or university…millions were his and ours.

Dad impressed us all when he moved into Chateau St. Michael’s and shared his joy and stories with the staff and residents. Losing more of his independence over these past months was challenging but he continued to persevere and wait for spring to get the van out again. We are grateful for the staff at the Chateau, the local friends and family who supported him on a daily basis, and for the care he received in his final hours at Regina General. We shouldn’t be surprised at his quick death – for if there was a job to be done…

Share Your Memory of
Emile
Upload Your Memory View All Memories
Be the first to upload a memory!
Share A Memory