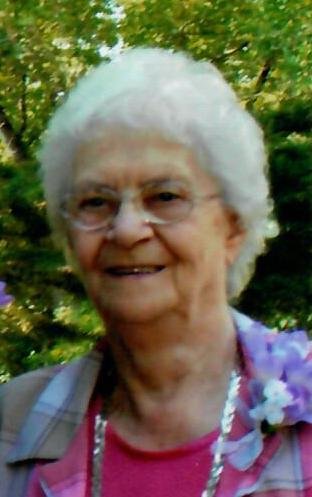 Catherine “Kay” Watamanuk passed away on Friday, March 6, 2020, at the Assiniboia Union Hospital Long Term Care, at the age of 99 years.  Kay was born on October 21, 1920, on a farm near Surprise, Saskatchewan. She was the eldest of a family of six. She attended Rosalee and Deatin country schools. At the age of fourteen, she went to work as a farmhand earning $3.00 a month. On May 8, 1941, Kay married William “Bill” Watamanuk at St. George Orthodox Church in Regina, SK. They farmed in the Readlyn district and in 1947, moved to Assiniboia, returning to the farm for seeding and harvest. In 1959, Kay started working casual at the Assiniboia Union Hospital and in 1961, accepted a full-time position. Kay worked in the dietary department and the laundry department until it closed. Then she transferred to the housekeeping department at the present hospital and worked as the head housekeeper, retiring in 1985. Kay loved to work and could often be found doing her laundry and housekeeping duties at 5 a.m. She was very independent person, had a great sense of humour, liked to read, enjoyed travelling to Alaska, Mexico, various places in Canada, was a wonderful cook, always making cabbage rolls and perogies for family celebrations. She lived in her own home until 2005, then moved into West Side Court and in 2014, moved into long term care until her passing. She enjoyed family, friends and company at all times. Catherine was predeceased by her husband William Watamanuk; daughter Betty and son-in-law Garth Voinorosky; daughter-in-law Grace Watamanuk; son-in-law Garry Buzinsky; parents John and Sarah Wendzina; brothers Steve and Tom Wendzina; sister Fran (Joe) Block; brother-in-law Ed Rodgers. Catherine will be lovingly remembered by her son Gerald (Dale) Watamanuk; daughter Marge (Rick) Hobbs; son Bob (Cindy) Watamanuk; daughter Joan Reeve (Andy Ruckaber); daughter Carol (Gordon) Fuhr; 14 grandchildren; 23 great-grandchildren; 34 great-great-grandchildren; sisters Ann Rodgers and Lil (Ken) Osmond; sister-in-law Sue Wendzina. Funeral Service will be held on Saturday, March 14, 2020, at St. George Roman Catholic Church at 2:00 p.m. Memorial donations in Kay’s memory can be given to the South Country Health Care Foundation for the Assiniboia Long Term Care Box 1750, Assiniboia, SK, S0H 0B0

Share Your Memory of
Kay
Upload Your Memory View All Memories
Be the first to upload a memory!
Share A Memory