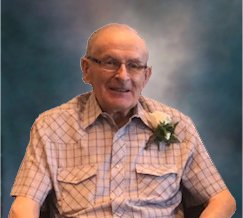 Wednesday, December 2, 2020 at 2:00p.m. A live stream for this service will be available on Piche Hawkins Grondin Funeral Chapels Facebook page five minutes prior to service time.

On November 27, 2020, at Willow Creek Manor, at the age of 85, the Lord opened his arms and welcomed Arthur George Straub home. After a brief stay in the hospital, he returned to Willow Creek Manor to be with his wife Jean, where they enjoyed his final days together.

Art was born April 14, 1935 at Hodgeville, Saskatchewan to Henry and Mary Straub. He was the third child of 4 children. He grew up on the NE-10-14-8 W3 and lived there most of his life. Art went to school at Vickers and then farmed with his family in the Hodgeville area.

He was active in Luther League where he met Jean Miller. They soon married at Trinity Lutheran Church on July 11, 1959. Their marriage was blessed with two children, Judy and Glenn.

Art and Jean were very involved in the Salem Lutheran Church. Art was a member of the council, choir and was treasurer for many years. He enjoyed mixed farming with grain and livestock, with seeding and harvest being his favourite times of year.

After Jean suffered from a stroke in 1988, Art took on more roles in the house to assist Jean without hesitation but with much determination. They formed a very strong team and stuck by each other through many obstacles they were faced with.

Art and Jean retired to Swift Current in 2005. He took pride in everything he did, in every aspect of his life. Art enjoyed restoring antiques, and had a knack of taking something old and making it useful again. Art and Jean both loved to socialize, play cards, and camp when possible. Art enjoyed having his family together and especially loved spending time with his four grandchildren.  He was very proud to join the celebration of the farm receiving its Century Farm award. It meant a great deal to him seeing the family farm carry on into its fifth generation.

Due to COVID restrictions, a private family funeral will be held on Wednesday, December 2, 2020, at St. Olaf Lutheran Church in Swift Current at 2:00 p.m. A live stream for this will be available on the following YouTube link: https://www.youtube.com/channel/UC9suByNLXMRBrJrju_TO8xw or  Piche Hawkins Grondin Funeral Chapels Facebook page five minutes before service time.  To view please click the following link:  https://www.facebook.com/Piche-Hawkins-Grondin-Funeral-Chapels-553681657999926 Thereafter, the service can be viewed on the funeral chapel website.

Share Your Memory of
Arthur
Upload Your Memory View All Memories
Be the first to upload a memory!
Share A Memory