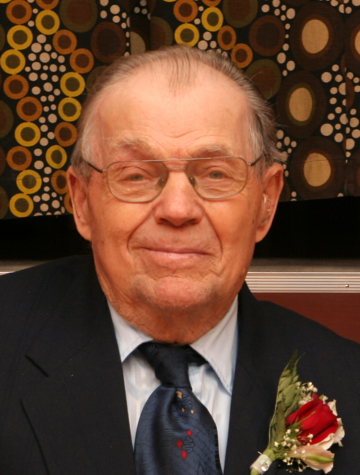 A private family Funeral Service will be held Saturday, March 27, 2021 at 2:00 p.m. Live Stream A live stream for this service will be available on Piche Hawkins Grondin Funeral Chapels Facebook page five minutes prior to service time.

Earnest Edward Schwab passed away on March 4, 2021 peacefully at the age of 96 at the Lafleche & District Health Centre. Earnest was born July 31, 1924 to William and Minnie Schwab, the second youngest of 11 siblings. He was raised on the family farm 7 miles south of Meyronne.  He helped his father William on the farm until the age of 23 when he married his sweetheart Marion Eydt on November 20, 1947 at the Eydt Family Farm.  In the spring of 1948, they moved to Woodrow, where they rented some land from Earnest’s brother for 3 years.  They raised chickens, sold eggs, had a few cows and sold cream for income.  In 1951 Earnest and Marion moved back to the Schwab farm to help farm with his Dad again.  They rented and purchased land there and lived with Earnest’s Dad until 1955 when they moved a house onto the same yard.  Grandson Danny and Amanda have remodeled the home and are still living there today.

Earnest loved farming.  He raised cows, pigs, and chickens.  Earnest saw many changes in his farming career.  In 2011, he received the Century Family Farm Award for 100 years of a three-generation farm.  It is now a fourth-generation farm with son Dale and grandson Danny continuing the legacy.

Earnest enjoyed bowling in the Meyronne and Kincaid league and won many trophies.  Earnest enjoyed playing cribbage and cards at the Meyronne, Kincaid and Lafleche Senior clubs.  Earnest and Marion enjoyed travelling and did a couple of cruises, Hawaii, bus trips and several trips to British Columbia. Earnest and Marion enjoyed eating out and most every day you would see their car travelling somewhere for supper. They moved off the farm in September 2012 and moved to the Prairie Villa in Assiniboia.

Earnest would love to drive downtown for coffee and visit with whomever.  Later, after he lost his license, you would find him driving down on his scooter to Andy’s for coffee, driving right down the middle of the road.  Only in small towns could you do that.

On November 22, 2017, Earnest and Marion celebrated their 70th wedding anniversary.  In April 2018 Marion passed away, and after 70 years together, Earnest was lost without her.  In December 2018 Earnest fell, broke his arm, and needed more care.  In the spring of 2019 Earnest was moved from the Prairie Villa to Lafleche & District Health Centre where he resided until he passed away.

We will miss our Dad, Grandpa, and Great Grandpa but have the pictures and memories to remember him by.  Love you.

Share Your Memory of
Earnest
Upload Your Memory View All Memories
Be the first to upload a memory!
Share A Memory