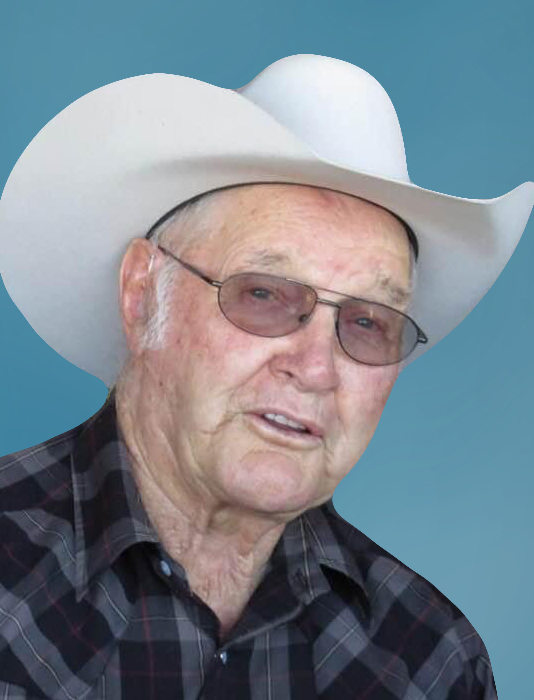 GILLESPIE, Donald Thomas was born to Thomas and Isabelle Gillespie on November 10, 1928 on the farm South of Mankota.  His childhood years were spent working on the farm and attending school in Bannock. Upon completing school, Donald went to work as a ranch hand on the Johnny Watt Ranch on the Montana border.   In 1949 he married his loving wife Norah, and together they started to build their lives, their family, and their herd of cattle.  The same year Donald and Norah would go to work on a ranch South East of Val Marie for Evans McNabb.  It was here that their first three children were born; Doug in 1949, Lois in 1951, Don in 1955.  At the time they were also raising a herd of Aberdeen Angus cattle that Norah had started prior to marrying Donald.  In 1963 they completed their family with the arrival of their son, Darwin, and in 1964 they were able to purchase the ranch south of Mankota where Norah had grown up.  It’s here that they would begin building their herd of Hereford cattle.  Donald and Norah started their purebred Hereford herd in 1977.  Over the next 40 years, they would develop one of the top Hereford cow herds in Canada, thus the DONORAH prefix would become well known.  Many champions were exhibited through Mankota and Maple Creek bull sales, Interprovincial and Red Carpet female sales and other various cattle shows along the way.  Alongside raising cattle, Donald was very involved in the advancement of the cattle industry.   He was instrumental in the building and completion of Mankota Stockman’s Weigh Company where he served as manager for 30 years.  Donald was one of the first ranchers to initiate grading yearlings or calves into carload lots in order to receive better prices.   Donald has been recognized as a lifelong member of the Saskatchewan Stock Growers Association, where he would spend 16 years serving as a Director.  Donald and Norah were also passionate about travel.  Many of their summers were spent hooked on to their camper travelling across the country.  One of their favorite destinations was Whitehorse to spend time with Lois and her family fishing off the coast of Alaska.  In 2011 Donald and Norah moved into Swift Current to be closer to the medical care that Norah would need.  They enjoyed their last few years together playing cribbage and making trips out to Donnie Wayne’s to check on the cows.  On July 8th, 2021 Donald passed away peacefully surrounded by loving family.   Donald was predeceased by his parents Tom and Isabelle, his wife Norah Gillespie, brother Neil (Edna) Gillespie, brother-in-law Jacob Woloshchuk and granddaughter Lacy Kay Gillespie.  Donald is survived by his sister, Margaret, sons Douglas (Colleen), Don (Beverly), Darwin (Chanti), and daughter Lois (Bob Cameron), as well as seven grandsons, one granddaughter and seven great-grandchildren.

Share Your Memory of
Donald
Upload Your Memory View All Memories
Be the first to upload a memory!
Share A Memory