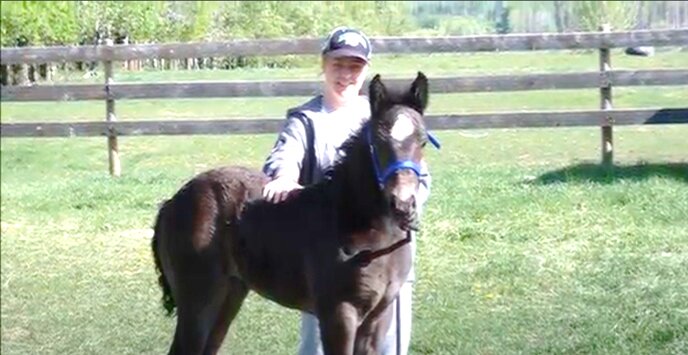 Our beloved daughter died today after a long protracted and horrific battle with MS.

Tarra Crooks Harder was born in Saskatoon, SK on February 8, 1974.  Home was a Trailer Park in the Sutherland area of Saskatoon where her father was pursuing a Veterinary Degree.  In December 1976 her baby brother Bob Crooks was born.

In the spring of 1977 the family moved home to what was termed The Clampitt Farm at Woodrow, SK.  The family left the Farm in the Spring of 1981 and moved to Shaunavon, SK.  Thusly began a series of moves.  To Earl Grey in 1982, where Tarra and the family lived for five years and then to Lumsden, SK, to a new acreage and a new house.

It was in Lumsden that Tarra obtained her first horses.  Amigo and Satin.  The Van Meer sisters taught her to ride and helped develop her love for the sport.  They took Tarra under their wing and introduced her to Dallas Valley Ranch Camp where she spent many happy weeks during the summer.  Eventually working as a Wrangler at Dallas.  Tarra completed her high school years in Lumsden and entered Olds College after graduation.

It was at Olds College in AB that Tarra met her husband Cory Harder and they were married in the Fall of 1994.  She then became part and parcel of the Harder clan of Blackfalds, AB.  Tarra and Cory lived all of their married lives in Lacombe, AB.

Tarra had a huge zest for life.  She loved cats, horses and people and participated in many activities.  She was a known presence in Lacombe, AB and it seemed like almost everyone in that Town knew her personally.  She rarely missed her coffee klatch at McDonald's and the Legion where she had many friends.  She loved life.

In the early years of her marriage, the Harder family introduced her to Christmas tree hunts and horseback riding adventures in the foothills of AB and poker derbies on horseback.  Those were good times for her and Cory and his family.

Tarra and Cory also returned to Saskatchewan regularly for almost every Christmas and summer holiday.  On her Dad's 70th birthday, Cory and Tarra planned and executed a 70th birthday celebration at Thomson Lake Regional Park in SK.  No small feat.  Perhaps one of the last times the Crooks family and friends were all together in one place at one time.

Tarra's battle with MS began early in her life.  At the age of ten, she lost most of her eyesight and was declared legally blind.  The battle was on and for the rest of her life she was ruled by the vagaries of that dread disease.

For many years Cory was her friend, partner and protector and eventually her caregiver.  Not an enviable position for a husband to be in but Cory was up to the task.  His love for Tarra never wavered.

Between 2016 and 2021 Tarra's condition deteriorated very quickly.  In February of 2019 Tarra entered a LTC facility in Lacombe, AB. where she lived out her final days

Between her deteriorating condition and the isolation and loneliness of Covid lockdown, she lost all hope.  Finally, in July of 2021 Tarra availed herself of Medical Assistance in Dying.  Her life ended September 1 of 2021 at the LTC facility in Lacombe, Alberta.  At the end she was supported by her faithful husband and partner Cory.

Tarra is survived by the love of her life, her husband Cory Harder, Rimbey, AB.

Left to mourn are her father and mother, Tim and Linda Crooks, Lumsden, SK;

Numerous aunts, uncles and cousins on both the Crooks and Harder sides of her family.

Tarra had many, many friends and we thank them all for the support they showed Tarra throughout her struggles in life.  Thanks also to those people in the community of Lacombe, AB who were always there for Tarra.  You know who you are.

We are very grateful and thankful for the staff, nurses and doctors associated with the Lacombe LTC who took great care of Tarra for more than two years.  There were many in that facility who went above and beyond the call of duty.  You are very special people.  For the rabbits, cats, goodies, bubble baths, and the other demonstrations of love and care of Tarra, Thank You.

Donations may be made in Tarra's name to Dallas Valley Ranch Camp,  Box 779, Lumsden, SK S0G 3C0 or e-transfers  dvalley@dallasvalley.com

Share Your Memory of
Tarra
Upload Your Memory View All Memories
Be the first to upload a memory!
Share A Memory