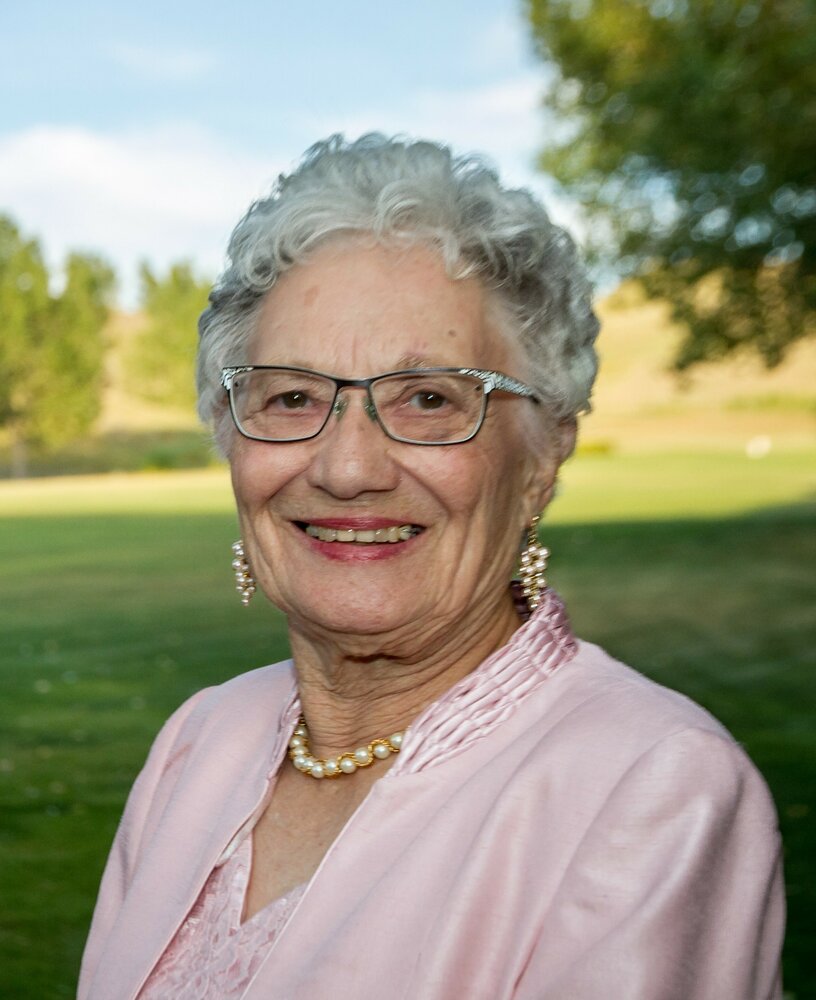 To view the live stream for Prayers and the Funeral Mass, click the tab that says “Facebook” on the left-hand side of the page. When it is available it will appear on Piche Hawkins Grondin Funeral Chapels’ Facebook page. Next, you will have to press the play button. The service’s live stream will become available five minutes before service time.

We are saddened to announce the sudden passing of Mrs. Louise Marie (Woitas) Dennehy in Swift Current, SK on December 28, 2021 at age 86.

Louise was born on July 23, 1935 in Estevan, SK and raised in the Weyburn area, her kind nature and determined spirit were apparent at a young age. Known for her dedication to her studies and helpfulness toward others, she received a scholarship to attend the Grey Nuns Nursing Academy in Regina and continued to excel in her studies.

She graduated and took her first nursing job in Vanguard, SK in the spring of 1957 where she met John Dennehy. Louise turned down a scholarship to attend medical school in the United States and instead lovingly set down roots at the Dennehy farm, north of Vanguard.  Louise and John were married in the fall of 1957 and raised their four children on the farm in Vanguard, and Swift Current. Louise was an active member in her communities and volunteered in many local organizations including: her church and CWL, skating and dancing clubs, music festival, boy scouts, and Vanguard Housing Authority, to name a few. She lived a busy life raising four children, working on the farm, gardening and canning. Louise greatly enjoyed her time with family and friends at the cabin at Lac Pelletier. Boating and water skiing were favourite pastimes. Louise water skied into her late 50’s and enjoyed going out on the sailboat with John.

Louise’s love of learning brought her back to school in the 1980s for a year of studies at the U of S in arts and economics, and again to study electrolysis and reflexology. Throughout the years she participated in many healthcare workshops and seminars including cardiology, gerontology, rehabilitation, physiotherapy, and advanced cardiac life support. She worked as a dedicated nurse at the Vanguard Union Hospital, and the Hospital and Foyer St. Joseph in Ponteix, SK.  She provided home care for many in the area and sat on the Saskatchewan Registered Nurses Association Council. She was honoured to be an Associate Member of the Sisters of Notre Dame Convent in Ponteix. Her passions included her 47 year nursing career and her faith. Louise’s involvement with the Catholic Women’s League of Canada (CWL) included executive positions on the Local, Diocesan, Provincial and National levels. She was happiest when she was serving others. Upon retiring from nursing she took a job in the fabric department at Walmart and thoroughly enjoyed serving the many customers she met.

Louise lived in the house her husband John built on the farm until December 2017. She then moved into The Bentley in Swift Current where she continued to participate in social activities and enrich the lives of others. She proudly received an Ambassador Award from the Bentley in 2020.

Predeceased by her loving husband, John Dennehy on August 19th, 2004, her parents Tom and Tillie Woitas, parents- in- law Jack and Mary Dennehy, brother, Gary Woitas, as well as numerous sisters and brothers- in-law, and a great- niece.

Louise lived each day to the fullest until her last. She was a kind spirited and encouraging friend to all who knew her. She took great pride in her independence, her family, her work, her volunteerism, and especially her faith. May we all live our lives by her example of faithfulness: “Trust in the Lord with all your heart, and do not lean on your own understanding. In all your ways acknowledge him, and he will make straight your paths.” Prov. 3:5&6

The family wishes to express a sincere thank you to all who shared in Louise’s life. In memory of Louise, friends so wishing, may make donations to:

Prayer Service will be held on Friday, January 14, 2022, 7:30 p.m., and Funeral Mass will be celebrated on Saturday, January 15, 2022, at 11:00 a.m., both held at Christ the Redeemer Roman Catholic Church, 1850 Springs Gate, Swift Current, SK. Thank you to Piche-Hawkins-Grondin Funeral Chapels for the arrangements.

Share Your Memory of
Louise
Upload Your Memory View All Memories
Be the first to upload a memory!