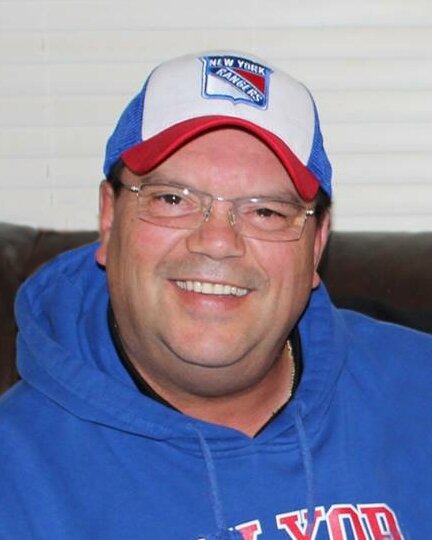 It is with profound sadness the family announces the passing of Robert Ernest Greensides, age 57, of Assiniboia, SK. Rob, affectionally known as Greener, was born on October 29, 1964, in Sydney, Nova Scotia to Robert and Gladys (nee Fiander) Greensides. He was the eldest of two children. The family moved west residing in Saskatchewan and for a brief time in Alberta. Assiniboia would become Rob’s forever home, completing his education at Assiniboia Composite High School (Class of 1982). He worked for Crossroads, CP Rail, GW Rail and the past twenty years at Nelson GM. Rob was a valued employee and an exceptional sales manager.

Rob was a sports fanatic, from player, to coach, to spectator. Ball, hockey, golf curling, and football, he loved them all. Many fond memories were had playing slow-pitch with the CP Track Rats, going to Rider games, Nascar races, watching hockey, and cheering on his New York Rangers with great enthusiasm. Rob and Bev also loved spending time at the lake and fishing.

Rob was a passionate volunteer and actively involved in his community. He served as the president of the Assiniboia Golf Course and was Co-Chair of the host committee for the Provincial Tankard and the Scotties Tournament of Hearts. He was proud to be part of the Southern Cruisers Car Club and enjoyed helping out with the local parades and showing his prized yellow Corvette.

Tragically, Rob passed away on Monday, April 25, 2022. Rob will be remembered for his zest for life, his infectious yet mischievous smile, and his commitment to his family, friends and community.

Rob is survived by his spouse Bev Dean and sister Penni Greensides. He is predeceased by his parents Robert and Gladys Greensides and Bev’s parents Merle and Edna (nee Howe) Dean.

A Celebration of Life and an opportunity for all to share your wonderful stories and memories of Rob will take place on Saturday, June 4, 2022, 6:00 p.m., at the Prince of Wales Auditorium, Assiniboia, SK.

Today we celebrate the life of Robert Ernest Greensides.  As I write that, I find it unbelievable and I struggle to find the right words to give such an incredible man the tribute he so deserves.  But I do know we will all definitely try to celebrate Rob aka Greener style.

Robert Ernest Greensides born October 29, 1964 in Sydney, Nova Scotia.  Although his family didn’t live there a long time, he was sure proud to be from the place that his Mom and Dad met; which may have contributed to his love of seafood.  Rob made his home in Assiniboia where he spent most of his school aged years and planted his roots here making a big mark on a small town.

Rob’s passion for sports developed at a young age as he played in several sports with ball and hockey being at the top of the list.  Penni describes how well she knew his seriousness for baseball when he would instruct her to backcatch for him in the back yard. “Penni go be the backcatcher” Rob called.  Penni, being excited to play ball with her big brother went to the catchers spot.  Of course, no equipment, no training, just a hardball and ball gloves. Well Rob must of thought it was the World Series and the bottom of the 9th and there was a speed gun on his pitch because that ball was coming at Penni’s head fast and furious and she recalls that if she didn’t catch that ball, it surely would have resulted in a hospital run. Although he didn’t partake in the World Series, he did enjoy playing. He played ball with the CP Track Rats.  He both played and coached hockey.  He would proudly gesture towards the hockey coaching picture of the Assiniboia Bantams with Kevin Cronan and himself, hung in his garage in that special spot amongst all his nostalgic wall hangings. He would tell many a proud stories and repeat those stories with his funny yet guilty little grin every time he told them as if it was the first time we heard the story.

Rob also had a passion for golf, curling and NASCAR.  Rob participated in several tournaments, broke several clubs, and even passed on his expertise and love for the game to many who cared to learn.  Rob loved his golf, especially his trips with the group called the Ragamuffins.  A group of family members and long time family friends, which included Uncle Don, Uncle Terry, Uncle Stuart and cousin Shawn to name a few. They met annually in the summer for a week long tournament either in Alberta or in Montanta.  We don’t know the shenanigans of these prized trips but we do know what he said which seemed too brief “what happens on the golf course stays on the golf course”.   Recovery time was usually quite lengthy and we don’t recall it being from any pulled muscles

Did we mention his love for Nascar . . . umm is that a sport?  It was the top of Rob’s Sunday sports.  I hope someone shares the exended story of Rob booking the group trip to Nascar.  Rob took planning of the trip into his own hands, never shy to volunteer, and as the group of them met up full of anticipation for a fun filled Nascar weekend, it was a shock to the group and egg in Rob’s face when they learned that there were no tickets . . . well not for that date anyways as Rob had booked them for the WRONG YEAR.  It cost a little cha-ching to get on the flights that day.  Live and learn we say when we don’t want to lose our volunteer organizer.

Rob did like his little trips and always had fun whether it was going to the lake, Tim and Penny taking him on some rides in the hills, or his last minute Grey Cup Trip to Toronto with Nelly, Tracy, Penny and Tim.  His trip with Marty, Michelle and Bev, or most recently going to Arizona with Jackie and Dale right before Covid shut down – he still had fun. No matter where, Rob had always had fun.  He did especially love going to the lake with Bev and just relaxing with the neighbors – I think fishing even became competitive with Rob, Bev usually won though.

He so willingly dedicated an uncountable number of volunteer hours to this community that he made look so easy because he really was an ever willing and natural organizer.  President of the Car Club, President of the Golf Club, and various committees for the  Curling Club to name a few of his passions.  He was actively involved in the 2021 Scott Tournament of Hearts which was a large and televised event that took a lot of time, planning and patience.  Rob’s active roll in volunteering in this town will surely be missed by many organizations.  Rob made a difference so that others could enjoy community events and we hope to see his example continue through others.

Rob demonstrated his strong work ethic from Crossroads to CP Rail, Great West Rail and finally at Nelson Motors. He always loved to sit and chat with his friends and have a beer or two or three or.. in the garage and have some laughs and I am sure discussions where they were solving the world’s problems or laughing at them. Not only were there talks and laughs, there were of course shenanigans..I believe the one story heard is someone being left in a truck after spending several hours with Rob, but I will let Curtis or Tracy clarify that story.  Rob always made sure everyone was welcome.

Rob had a strong love for family and friends and would always be there for anyone.

Not only was Rob an incredible son who was the apple of his mothers’s eye, his father’s little man, and a protective big brother, a fun loving nephew who felt more like a brother and best friend, and amazing cousin and incredible uncle.

Thirty-three years ago met the love of his life Bev. Bev was the perfect partner to Rob and became a very loved daughter-in-law and sister to Penni. Rob became Uncle Rob/Robbie to many. He was always willing to play, do bike rides, providing guidance, pulling many on tubes behind the boat, helping us all out whether out of trouble,  and take part in many family birthdays and events. Bev and Rob created a beautiful home where many family events were held, Rob and Bev also enjoyed many family events such as going out to Alberta to visit relatives  or going on camping trips in with Merle’s camper, road trips in Rob’s cherished yellow corvette to Yorkton to visit family, and so much more.  If there was a significant moment or occasion in the family, Rob and Bev were there, sharing in it and making it even more special. Throughout the last several years Rob and Bev always enjoyed several Rider games and much time was spent at the lake where they would make fishing a competitive sport with Bev kicking Lance and Rob’s butt most of the time.

I know many of us - family and friends, will miss the many nights spent with my brother and sister in the garage, whether watching sports, shooting the shit playing cards darts or any other games, cranking the music and listening to stories or Rob singing. Rob was one of those rare people who had a gift for creating joy wherever he went. He not only found something to smile or laugh about in just about every situation, he had the knack of being able to help the rest of us find those moments too.  His smile made us smile, his laughter made us want to laugh.  He lived life to the fullest, and helped his friends and family live that way too.

I am sure there are many stories that will come out of the woodwork tonight as we share the many laughs and memories, he gave us.

This is a small picture of the big life that Rob lived.  He was hard-working, hard-playing, practical joker, SPOUSE to Bev, BROTHER to Penni, NEWPHEW to many, COUSIN to many, UNCLE to a few, FRIEND to so many, EMPLOYEE, VOLUNTEER, COACH, COMPETITOR and Ragamuffin.  We are all privileged to have known and loved Robert Ernest Greensides.  His infectious laugh, smile and generosity will be so very deeply missed and forever marked on our hearts and memories.

So Rob, on behalf of us all thank you…..thank you for the love, the memories, the smiles, and having an impact on many.  We Love you and until we meet again, I know you are watching, protecting us and at times shaking your head ... until we meet again Rob ….Give Heaven Some Hell.

Share Your Memory of
Rob
Upload Your Memory View All Memories
Be the first to upload a memory!
Share A Memory