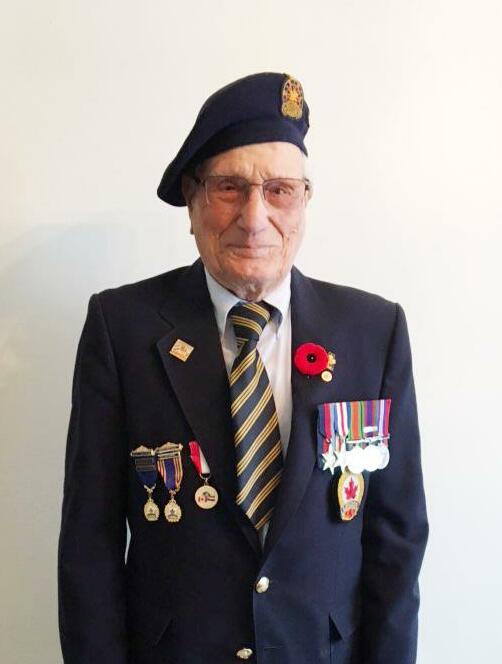 10:00 am
Our Lady of the Assumption Co-Cathedral
1st Avenue East
Gravelbourg, Saskatchewan, Canada

Léo Rene Bouvier of Gravelbourg, SK passed away on Tuesday, July 5, 2022, at the age of 100 years. Léo was born on August 26, 1921, on a farm near Gravelbourg, to Elphie and Anna (nee Dubois) Bouvier. He was the 5th of 7 children. He began school when he was 7 years old, and finished grade 10 by correspondence through Wessan School. He then attended school in Gravelbourg, riding his peddle bike 9 miles every day. After completing his education, Léo worked for his brother-in-law, Gaston Jacques. In 1941 Léo was working for a local farmer when he decided to pursue a change in career and joined the armoured core as a signalman. He spent two months in Portage la Prairie, MB taking basic training. He was then sent to St. Johns Technical School in Winnipeg and studied welding and blacksmithing. The following spring, he was sent to Hamilton, ON to complete his courses, and then Barryfield, ON to finish army training. After earning his Corporal Stripes and passing his tests, Léo became an instructor. In the fall of 1943, Léo was deployed overseas and served in England, France, Belgium, and Holland. Upon returning home, Léo rented a half section of land from his father and worked with his brother Raymond. It was during this time that Léo was introduced to a beautiful girl named Germaine at a friend’s party.  Léo married the love of his life, Germaine Provençal, on June 17, 1947, in Ponteix, SK. They farmed the family homestead and raised chickens, pigs, and cattle. Over the years Léo took interest in the community. He was a municipal councillor for twelve years, director of the Co-op for eleven years, and chairman for two years. He also worked at building Thomson Lake for two years. Léo and Germaine were blessed with five children, and there were many good times had while they were growing up. After selling his cattle, Léo worked as a carpenter for fifteen years, and later as a carpet layer. In 1979, Léo and Germaine decided to build a house in Gravelbourg. They continued to farm until 1983 when they decided to retire. They spent the next several years travelling, touring Europe, Fiji, Australia, New Zealand, and Tahiti. They also enjoyed trips to the Atlantic Provinces and the United States. After retiring, Léo drove a transit bus for seniors and was also the director of the local museum. He was a proud member of the Gravelbourg Royal Canadian Legion and became the Sergeant of Arms in 1964. Léo treasured time spent with his family, and his grandchildren and great-grandchildren were very special to him. “Be the best you can be and be proud of yourself. Be patriotic, love your country and love one another.” -Leo Bouvier.

Share Your Memory of
Léo
Upload Your Memory View All Memories
Be the first to upload a memory!
Share A Memory