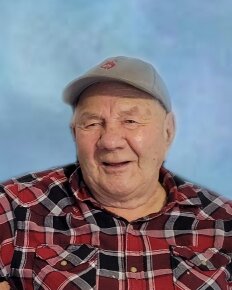 Peacefully and surrounded by his family and friends, Robert Beliveau passed away at Rockglen, Saskatchewan on August 12, 2022. He will be lovingly remembered by his daughter Rosemarie (Dale) Rotariu and three sons Joe Beliveau (Holly), Roy (Gina) Beliveau, and Bruce Beliveau (Rosana). He will be missed by sisters Carole (Bernie) Dighans and Catherine Mondor (Omer LaPointe), and sister-in-law Verna Ogle. He will be also remembered by his treasured grandchildren Travis (Nikki), Tracey (Mike), Brandy (Don), Marney (Robert), Gheorghe, Dustin (Carlyn), Megan (Mario), Brody (Kelsey), Clark (Miriah), Thomas (Fran), James (Raven), Erin, AJ, and numerous great-grandchildren, relatives, and friends. Robert has now rejoined his dear wife Coletta (nee Fitzpatrick) Beliveau in the heavens above, they were married 65 years. Coletta left this earth a year ago. He is predeceased by his mom and dad, Magdalena and Harry Beliveau, brother Johnny (Rosalie) Niesner, sisters Anna (Fred) Huggins, Margaret (George) Pequin, Beatrice (Pat) Johnstone and brother-in-law Omer Mondor. Robert was born June 10, 1930, near Gravelbourg, Saskatchewan. He grew up on the family farm in the Canopus district. After Robert finished his education at Canopus School. He began his career on the family farm where ranching and farming became his passion. He passed down his passion to his children and grandchildren, the farm lives on. The family was everything to Robert. At the age of 82, he retired and moved to Rockglen. It was there he was able to enjoy his grandchildren and many great-grandchildren, attending all their functions. Every day one of his grandkids or great-grandkids would stop in for a visit, it was the highlight of his day. Robert leaves a legacy of family and community spirit, hard work and always being nice to people. He will be missed. Celebration of Life was held on Thursday, August 18, 2022, 4:00 pm, at the Rockglen Community Hall, Rockglen, Saskatchewan. Presider was Roy Beliveau. Poem was read by Shelly Urquhart. Memories from Robert’s Nieces & Nephews were shared by Dannette Cremer. Eulogists were Dustin Beliveau and Travis Rotariu. Special music by Londyn Beliveau. The Lord’s Prayer was shared by Dannette Cremer. Urn bearers were Tracey Rotariu, Gheorghe Gray Davidson, Harvey Beecroft, Thomas Beliveau, Joe Beliveau, and Rosemarie Rotariu. Private Family Interment took place at St. John Roman Catholic Cemetery, Rockglen, Saskatchewan. Memorial donations in memory of Robert to the Grasslands Health Centre, Box 219, Rockglen, SK  S0H 3R0, were greatly appreciated.

Share Your Memory of
Robert
Upload Your Memory View All Memories
Be the first to upload a memory!
Share A Memory