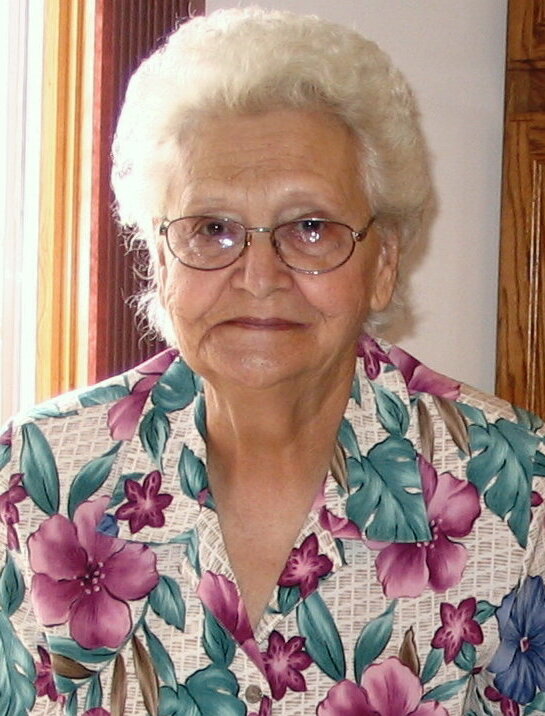 Aurore Marie Jeanne Faucher was born in a farmhouse east of Lisieux, on August 31, 1930, she was the 8th of 13 children. Aurore, also known Mémère, attended school in Lisieux, Saskatchewan. Growing up in the Catholic faith, she loved music and sang in the church choir. Her faith carried her through her most difficult days when times were tough on the farm or when tragedy would impact her life. Her Catholic faith was extremely important to her with her rosary always near, she would have masses held for family and friends. After completing her grade 10, Mémère started her nursing career working as a care aid at St. Joseph’s Hospital in Gravelbourg, Saskatchewan. In 1951, she followed her parents to British Columbia and worked as a care aid in Cranbrook, British Columbia.  Her time as a care aid served her well raising children, always knowing how to tend to a cut, a broken bone or an injury.  Mémère was always calm and knew what to do when nursing care was needed. Her skills carried on when she required care from the home care nurses who visited her. They appreciated her detailed level of charting when she documented the times of all her medications for the nurses to review on their scheduled home care visits. Her care and compassion for others carried on when she was a resident at Grasslands long-term care facility, when she would offer the nurses to sit with any of the residents who needed comfort in their final days. In 1953, she returned to Lisieux to marry a young suitor, Greg Faucher, who swept her off her feet at the local dances. Together they raised 5 children: Jocelyne, David, Nicole, Alain and Lyanne. Mémère and Pépère farmed and raised cattle, chickens, pigs, ducks, cats, dogs and a pet deer named Slim. Mémère was a dedicated and skilled vegetable gardener, she fed her entire family (and many others who she loved to share her vegetable crop with). Along with growing vegetables, Mémère had a raspberry patch that could feed the entire country, gallons and gallons of raspberries she picked and made into the best homemade jam and jelly along with a homemade bun enjoyed by all. With the eggs that came from the chickens Mémère made delicious Angel Food cakes with raspberries and whipped cream. Another one of Mémère’s signature desserts was chocolate cake and sucre a crème…served at family dinners. Together Mémère and Pépère designed and built a new home on the farm in 1969. Fulfilling Mémère’s dream to have a new home, it was difficult for her to leave it when her and Pépère retired to Rockglen. Adapting to town life came with new opportunities as Mémère developed new friendships joining a walking group.   Mémère and Pépère enjoyed travelling to the Maritimes, Quebec, Florida, California and BC.  They also enjoyed pattern dancing, bowling and camping. In retirement she enjoyed landscaping her new yard in town, which was a showpiece. On the south side of the house was a rose patch with many variations of roses, and the front yard had tulips and petunias growing around the crescent driveway. Mémère’s dedication to her yard could not be challenged when it was her ‘watering day’…life had to work around the scheduled days that her beautiful plants needed water. Mémère had a passion for sewing clothes for her children and herself. Her flair for fashion was complimented by love of shopping for her beautifully tasted outfits.  In retirement she took up quilting making quilts and quillows for her grandchildren. She also crocheted Afghans for grandbabies and created afghans to cover up with at the bed at night. Mémère experienced a lifetime of mental health challenges, she suffered from the disease but also from the shame and stigma of the disease. Throughout her difficult journey there was such a poor understanding of mental health illness or the treatment. As a family it was extremely difficult to see her struggling as we felt frustration from her resistance to seek treatment at times. Her journey was very difficult but really she was a true pioneer for all of us to learn from, mental health is one of the most important facets of every single person’s health and it is something that we need to embrace and support one another without shame or judgement. On Thursday, August 11, 2022, Mémère was reunited with Pepere, son Alain, granddaughter Katelyne along with her parents Emile Lamontagne and Angelique Prefontaine, brothers Paul Emile, Leo, Guy, Marcel, sisters Bernice Laci, Lilian Dash, Terry Chilson, Marie Ridge, Evelyn Guest, Alice Faford, and Doris Ferguson. Aurore is survived by her children: Jocelyne (Dave) Dechaine, David (Brenda) Faucher, Nicole, Lyanne (Bryan) Sinclair, daughter-in-law Mona Faucher and 17 grandchildren, 39 great-grandchildren and 3 great-great-grandchildren, her sister Joan Forseth, sister-in-law Yolande Bissonnette, brother-in-law Ernest Bissonnette, and sister-in-law Rose Faucher. Prayer Service was held on Tuesday, August 16, 2022, 7:30 pm, and Funeral Mass on Wednesday, August 17, 2022, 2:00 pm, both at St. John R.C. Church in Rockglen, SK. Celebrant was Father Clement Amofah. Cross bearer was Darbie Dechaine. Placing of the pall by Brenda Faucher and Mona Faucher. Paschal candle lighting by Monique Dechaine. Readings and Prayers of the Faithful were shared by Aleshia Martin, and Kristine Dechaine. Eulogists were Nevon Faucher and Danielle Phillips. Active pallbearers were Nevon Faucher, Daniel Faucher, Isabella Martin, Marcie Faucher, Karlene McMillan, and Celeste Faucher. Interment took place at the Lisieux Cemetery. Tributes in Aurore’s memory to the Grasslands Health Center, Box 219, Rockglen, SK  S0H 3R0 were greatly appreciated. The family would like to thank the home care nurses, care aids and staff who gave Mémère exceptional care at the Rolling Hills and Grasslands.

Share Your Memory of
Aurore
Upload Your Memory View All Memories
Be the first to upload a memory!
Share A Memory