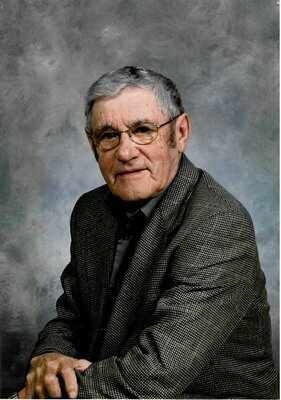 Elmer Clarence Benaschak was born in the Bateman, SK district on February 1, 1932, the eldest child of Bill & Susie (Gattinger) Benaschak.  Elmer departed this life at the Foyer d’Youville, Gravelbourg, SK on the evening of June 23, 2022 at the age of 90 years.

Elmer went to Fischman School in the country for grades 1-7 and then attended Bateman School for grades 8-12.  In 1950 he left home to work for Bird Construction in Moose Jaw for two years before driving truck for National Fruit Co Ltd. for the next ten years.  In 1963 Elmer returned to Bateman to farm where he was active on the farm for nearly 60 years.  During his early years on the farm he also drove school bus – something he quite enjoyed.  As well, Elmer had some seasonal employment at Les’s Sales and Service Ltd. in Gravelbourg and he was also a caretaker at Bateman rink for several winters.  Elmer had a share in Frank’s Meats.  For many summers he did deliveries to the fair grounds during exhibition week in Regina and then on a weekly basis – until he was in his late 70’s – he did meat deliveries to Gravelbourg and surrounding towns.

Elmer enjoyed supporting the community.  He joined the Gravelbourg Lions Club in 1977 and was an active and devoted member for many years.  He also served as a Gravelbourg RM councillor for a period of time.

Elmer was an avid participant and fan of many sports.  He bowled, spent many hours on the golf course, refereed hockey and curled into his 80’s, but his favorite sport was baseball.  Over the years he played both fastball and slo-pitch, as well as coached both girls’ softball and boys’ baseball teams.  He was a fan of the Toronto Blue Jays and seldom missed watching a televised game.  He also enjoyed playing pool, card games, fishing trips up north with friends and travelling with his partner Emma Mercier to Arizona, Hawaii, Las Vegas and Montreal.

Elmer was a kind, humble and thoughtful person who was always genuinely interested in others.  He had an easy-going demeanour, loved to socialize and could visit effortlessly with people of all ages.  Elmer was a friend to all.

Due to health issues Elmer left the farm in April 2020 and moved into the Pioneer Villa in Gravelbourg. He resided at the Villa until March of this year when he became a resident of the Foyer d’Youville.

Elmer’s memory will live on forever in the hearts of his family:

A Service of Remembrance for Elmer Benaschak was held on Saturday, July 9, 2022 at 2:00 pm at the Gravelbourg Legion/Lions Hall with Sam Hawkins officiating.  Urn bearer was Randy Benaschak.  Memories of Elmer were shared by Clay Benaschak, Dwight Benaschak and Brigitte Mercier-Corbeil.  Scripture readers were Blaine Machan and Blake Machan.  Recorded music for the service included: ‘Amazing Grace’ (bagpipes version), ‘How Great Thou Art’ (Alan Jackson) and ‘When I Get Where I’m Going’ (Brad Paisley).  Interment took place at the Bateman Community Cemetery.  Memorial donations in memory of Elmer to St. Joseph’s Hospital/Foyer d’Youville Foundation P.O. Box 810 Gravelbourg, SK S0H 1X0 were greatly appreciated.

Share Your Memory of
Elmer
Upload Your Memory View All Memories
Be the first to upload a memory!
Share A Memory